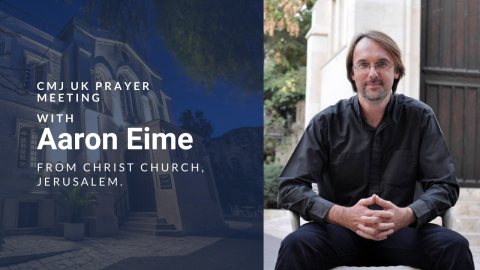 Aaron Eime is an Australian and it was in Australia where Aaron did his first degree in Psychology.  An interest in science took him to a meeting one night where he came to believe in Jesus as his Saviour.
Later, in Israel, Aaron studied at the Hebrew University in Jerusalem, doing an MA in Early Jewish and Christian interpretation of the Bible.
Aaron has been in Israel for 22 ½ years.  He is a deacon at Christ Church in Jerusalem, one of four CMJ centres and has studied the Bible with rabbis for the past 14 years, where much debate has ensued!
Aaron is married to Michelle, and they have three children.  The eldest, Micah,  born in Bethlehem, was recently called up for his national service in the IDF, the Israeli Defence Force.   Micah’s younger sisters are 18-year-old Atarah and 12-year-old Tirzah.
Aaron is an International Bible speaker and has been to the UK numerous times.  He writes weekly sermon notes for distribution to CMJ groups around the world and much more!